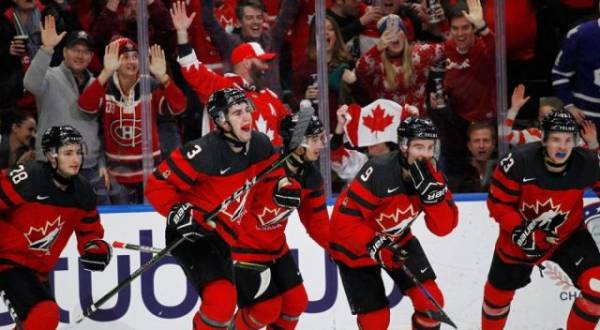 Canada's Akil Thomas scores the winning goal against Russia in the gold medal game at the IIHF world junior hockey championship in Ostrava, Czech Republic, on Sunday. Canada won 4-3. Simon Hastegard - Contributed
In one of the great turnarounds in tournament annals, Canada scored three times in the final 11 minutes - including Akil Thomas' stunning hustle-and-deke decider with 3:58 left - to shock the Russians 4-3 before 8,693 Sunday at Ostravar Arena. They avenged their 6-0 loss to their long-time foes last week and rebounded to win their second gold in three years and first on European ice since 2008. It's the 18th in Canada's long history of success at the event. Halifax Mooseheads' Raphael Lavoie and Jared McIsaac were members of the Canadian team. Cape Breton Eagles' Egor Sokolov had an assist for the Russians in the final.
The rally was also shades of Russia's last golden triumph - a third-period surge from a three-goal deficit in 2011 at Buffalo. This doesn't happen without Canadian captain Barrett Hayton, who was a game-time decision to play because of a left arm injury. He scored his sixth goal 10 seconds into a critical third-period power play to battle back from a two-goal hole and tie the game with 8:39 left in regulation. That followed a Connor McMichael re-direct off his leg to draw them close.
It was the London Knights forward's fifth goal in seven games. Nikita Alexandrov opened the scoring midway through the second on Russia's fifth power play, tipping an Egor Zamula point shot deemed good after a video review for a high stick. There were a couple of dicey calls by the officials. The worst was a holding the stick penalty to Hayton that led to Russia's opening goal. But Canada tied one-and-a-half minutes later. Dylan Cozens pounced on a loose puck early in a Canadian two-man advantage.
By now, you know the story. Canada started the tournament with an emotional Boxing Day victory against United States. Everything that could go wrong did in their follow-up 6-0 defeat to Russia, their worst loss ever at the event. Joel Hofer took over the starting job in net for Nico Daws and the Canadians dominated their next four games against Germany, Czech Republic, Slovakia and Finland. Russia, up and down in the preliminary round, took out the Swiss in the quarter-final, then beat Sweden in an overtime thriller.
The Canadians had a full complement of players, a rarity since the opening game of the tournament. Hayton injured his shoulder in the third period in the semifinal Saturday, but he suited up and played. Flu-stricken d-man Bowen Byram, who couldnt answer the bell in the semifinal, improved enough to get out there, too. Hayton, clearly playing through pain, shifted to the wing and Cozens took over faceoff responsibility on a new-look line with Alexis Lafreniere.
Back in the summer, Canada's early potential top line was Lafreniere, Joe Veleno and Kirby Dach. But Dach, the third overall pick last summer, stuck with the Blackhawks. Eventually, Dale Hunter settled on Lafreniere, Hayton and powerful Nolan Foote. They were a dominant force at times. But they only really had one full game together - the first one against the Americans. Lafreniere was injured in the Russian debacle and missed the next two games. When he returned, Foote was ejected 53 seconds in for a hit judged to be too high in the quarter-final against Slovakia.
Then, Hayton went down. The Canadians spent a good chunk of the opening period on the penalty kill. Liam Foudy and Ty Dellandrea pulled much of the heavy lifting and Thomas sprawled to block a booming point shot. They granted Russia four power plays and a Veleno interference penalty wiped out Canada's only early chance with the man advantage. Russia didn't score and the Finnish refs Lassi Heikkinen and Kristian Vikman were roundly booed off the ice at intermission by the largely pro-Canada crowd.
The Canadians braced themselves for an uncomfortable test of their discipline. It's easy to lose composure against the Russians. That's what happened in the loss last week.
"They want to get under our skin," said Veleno, suspended for a barely-there headbutt in a stare down with Russian d-man Daniil Misyul in the first meeting. They were giving us some cross-checks. They're hitting us a little late. They're passing in front of our bench and giving us some smirks. It's aggravating when that happens."
But who had the last laugh? Canada did. Jared McIsaac played for Cole Harbour in the Nove Scotia Eastlink Maajor Midget Hockey League, and McIssac and Dawson Mercer both played in the Chronicle Herald East Coast IceJam, at the BMO Centre in Bedford. The 2020 Chronicle Herald East Coast IceJam starts on January 8 and runs to January 12.

Halifax McDonalds ready to pick up from where...

Hockey in Nova Scotia inching toward a complete...