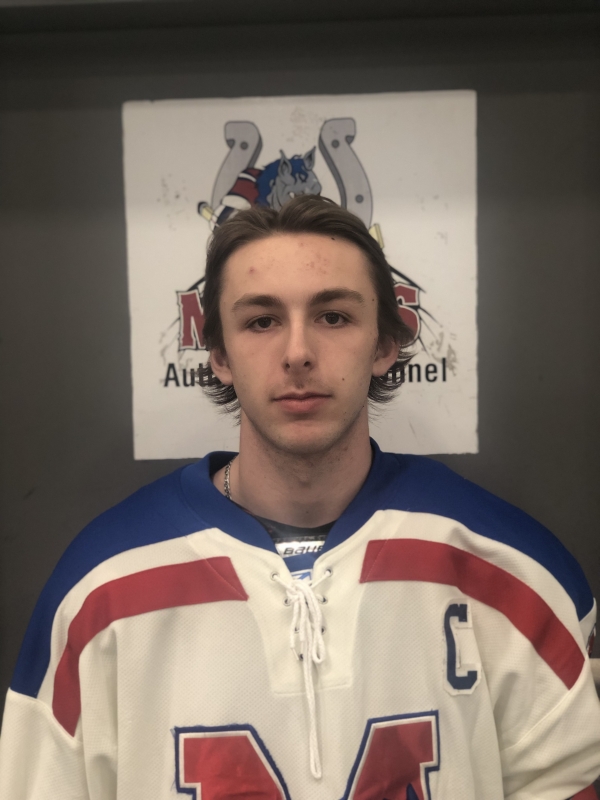 ‘When he speaks, people listen’

Jared Pitman, the new captain of the U18 Major South Shore Mustangs, spent part of the pre-season in camp with his hometown Yarmouth Mariners of the Maritime junior A league.

The South Shore Mustangs didn’t need to deliberate for long to choose their new captain for the 2022-23 Nova Scotia U18 Major Hockey League season.  Sophomore forward Jared Pitman, a 16-year-old draft pick of the junior A Yarmouth Mariners and the QMJHL’S Acadie-bathurst Titan, became an obvious choice as the Mustangs selected their leadership group.

“There was no debate, really,” said South Shore coach and general manager Ian Haverstock. “When we discussed it, all the staff right away said, ‘It’s Pitman’s team this year. It’s time to give him the C and let him run with it.’  “No question at all, he was the guy. He’s the only player on our team that attended a Q camp this year and then a junior A camp. I know it’s minimal, but he’s got experience at both (of those) levels, which helps.”

Pitman is a two-way centre from Tusket, Yarmouth County, now billeting in the Bridgewater area with the family of former Mustangs teammate Kyle Hopkins of Conquerall Bank.

“His work ethic, his play, he’s definitely going to be a leader on the ice,” Haverstock said of Pitman. “Off the ice, when he speaks, people listen. I don’t think he’s always the most vocal person, but guys like (Jayson) Hanson and (Max) Hilton-king are vocal and they support him well.”

Pitman welcomed wearing the C with a Mustangs franchise hoping to rebound from last-place finishes in the past two seasons.

“It means a lot to be captain, especially on a team that should have success this year, and when you have a great group of guys that want to win,” said Pitman, who last wore the C in his final U15 major season.  “Having the opportunity to go to Bathurst’s training camp was an amazing time. You get to see how fast and skilled the next level is and what you have to do to get there.”

Hanson, Hilton-king and Elijah Leinwand have been named South Shore’s assistant captains. All three of those 2005-born players are among seven returning Mustangs. Hanson is a forward from Bedford, Hilton-king is a defenceman who resides in Hammonds Plains and Leinwand is a forward from Halifax.  “They all bring something a little different,” Haverstock said of his assistant captains.  “Leinwand’s work ethic is second to none. He’s a big body, strong kid, and he just works every day at practice, every rep, every shift. That’s the example you want to set for the first-year players looking up to you.  “Hilton-king sustained injuries in the tryout process for two years in a row and has kind of missed out on this level. So, between his dedication and being one of the more vocal kids, his teammates are going to look up to him. He’s a leader. He likes to talk and help the boys out. Very positive.  “Hanson, play-wise, he can definitely put the puck in the net. He’s got a great skill set. And he’s the life of the dressing room. He’s the guy the kids like to huddle around. He’s always got a story or a joke. Just a real good ball of energy every time you walk in the room. He puts a smile on your face when you see him, that’s for sure.”

The Mustangs were smiling as they regained the services of Pitman and fellow Yarmouth County forward Sam Hope, also a territorial draft pick of the Mariners. Hope, a 16-yearold power forward from Plymouth, scored 14 times in his U18 rookie season and had a four-goal game as part of his five-point opening night this year.

“Hope and Pitman had a great couple of weeks at Yarmouth’s camp, so that’s great experience for them,” Haverstock said. “Hope had a big night in our first game. We’re going to need that from those guys this year.

“It’s great to have all of our returning kids back, to be honest. It’s a really good group. They make up our leadership this year.”

Haverstock is confident the returnees, including defencemen Koen Shand and Jaxson Welsh, can help with the progression of a young defence and two new goaltenders, Graydon Mole and Cohen Stoddard.  One of the new defencemen, Luke Crotty, actually played 12 games with the Mustangs last year while called up from the U16 AAA Admirals.

Although they lost goaltender Nathan Mills in the off-season when the Bathurst major junior prospect jumped to the Halifax Mcdonald’s, the Mustangs believe they might eventually have one of the league’s best tandems in the 2005-born Mole and the 2007born Stoddard.  Falmouth’s Mole has two years of U16 AAA experience with the Valley Wildcats. Barrington’s Stoddard, a graduate of the U15 major Western Hurricanes, is in the mix for Nova Scotia’s Canada Games team.  “Out of all the available goalies coming from the U16 level and high school, Mole was on our list as the No. 1 guy and we’re happy we got him,” Haverstock said. “He’s going to complement our first-year goalie really well, give him some support. They’re both very good, very athletic, very competitive.”

Stoddard, Pitman and Hope are part of the Mustangs’ strong contingent of southwestern Nova Scotia players, including rookies Cameron Barnes at forward and Lucien Doucette and Dawson O’connell on defence.  Four of those six players are billeting in the Bridgewater area, while Hope and Doucette are commuting from Yarmouth County for practices and home games at the Lunenburg County Lifestyle Centre.

Recognizing their personnel and sponsor support from the southwest region, the Mustangs plan to play a game or two in Barrington or Yarmouth this season.

South Shore was encouraged with the team’s early signs of improvement this season.  “Our depth is a lot better than where it’s been the last two years,” Haverstock said. “I think we have a little more offence as well, a few more guys that can put the puck in the net. And our one-two goaltending (duo) is probably a little bit deeper than it was.  “We’ve made the changes, and despite what could have been, should have been, whatever, we’re very happy with the group we have this year.”