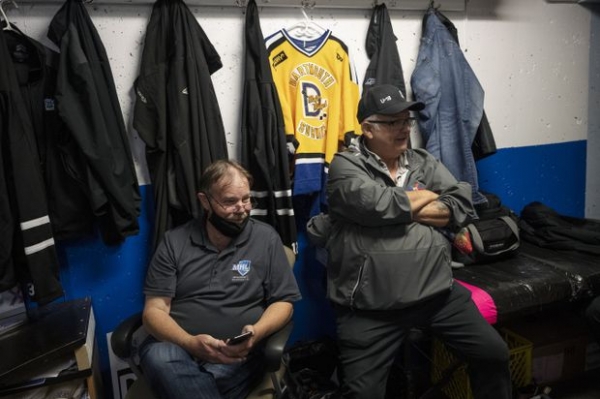 The dressing room of the Dartmouth Steele Subaru Major Midgets has a wall of fame that could rival any minor-hockey program in Canada, with names such as Sidney Crosby, Brad Marchand and Cam Russell looming over the players below.

They’re among the more than 20 players who skated for Dartmouth as teenagers on their way to careers in the NHL, and some of the roughly 50 alumni who graduated to professional hockey. But sometimes, head coach and general manager Steve Crowell wonders about the ones who never had a chance to play on a bigger stage.

Before the arrival of the QMJHL in Atlantic Canada in the 1990s and 2000s, the East Coast was unknown territory for most hockey scouts in Canada. Before Triple A midget teams such as Dartmouth, Cole Harbour or the Moncton Flyers became well-known pipelines for major-junior hockey, the NHL and other professional leagues, players there had to defy the odds to get noticed.

“It was just a totally untapped region,” said Crowell, a veteran coach who has been a fixture of Nova Scotia’s midget hockey scene since the 1980s. “So many really good kids never got opportunities back then. Nobody saw them.”

Some players did break through, of course, with notable Nova Scotian NHLers such as Al MacInnis and Glen Murray, who signed pro contracts in the 1980s and early 1990s because they were given a rare shot in the OHL and had exposure on national teams. But unless you were an exceptional talent, it was hard to get attention outside the region.

Since then, the arrival of an army of QMJHL scouts, and generational players such as Crosby, have drawn more attention to East Coast rinks than in the past.

“It’s just exploded,” Crowell said. “It’s like night and day. There were no less than 20 scouts in the building for our season opener on Sunday. We have 15 to 20 scouts at every one of our games now.”

Pittsburgh Penguins' Sidney Crosby against the New York Islanders in Uniondale, N.Y. on May 22.

Today Dartmouth alumni can be spotted throughout the NHL. Morgan Barron made his debut with the New York Rangers last season. Matthew Highmore, in his fourth season in the NHL, is now skating with Vancouver. Luke Henman, Dartmouth’s former captain, was the first player to sign with the Seattle Kraken. Defenceman Peter Diliberatore got into pre-season action with the Vegas Golden Knights.

Any bias that used to exist against players from the Maritimes is long gone, said Bob LeBlanc, the long-time head of scouting for the QMJHL’s Halifax Mooseheads. Players who in the past would have been relegated to lower rounds in the QMJHL draft, because scouts had seen so little of them, are now going in the first round. Before there were any Q teams in the Maritimes, language barriers also made some players reluctant to play in Quebec, and some teams hesitant to sign them, which also limited their options.

“In the past, unless you were the top dog, you didn’t get that opportunity. There was no way you could really show what you could do,” LeBlanc said. “For a long time, the Quebec teams wouldn’t touch anybody from the Maritimes.”

For a time in the 1970s and ‘80s, LeBlanc was one of the only scouts working in Atlantic Canada, tracking players for the Hull Olympiques. Today, his network of scouts crowd into the stands along with those from every other Quebec major-junior team. It’s common to have dozens of them at every showcase tournament in the region.

“In the early days, it was open territory back then. I had my pick of the litter,” LeBlanc said. “A lot of the Quebec other teams saw this, and said ‘Whoa, this isn’t fair.’ I was bringing the top Maritime kids in, and we were winning. So they started to get their scouts into the Maritimes, to do what I was doing.”

It helps that the six QMJHL teams now in Atlantic Canada have put a priority on signing local players, giving them a chance to be drafted that didn’t exist before. The Mooseheads aggressively pursued Nathan MacKinnon, like Crosby another Cole Harbour, N.S., native, and he thanked them by leading the team to its first Memorial Cup championship in 2013, before the Colorado Avalanche used their first pick to select him.

Players here no longer have the pressure to perform in one big tournament, because scouts are following them all season long, LeBlanc said. The Mooseheads, the first QMJHL team to be established in Atlantic Canada in 1994 after the departure of the AHL, have four scouts dedicated to the Maritimes, along with four in Quebec and one in the United States.

“In the past, players here couldn’t even see major-junior hockey games. They looked at the NHL and thought that’s sort of far-fetched,” LeBlanc said. “Now they start at a young age wanting to be Sidney Crosby. They say, ‘Jeeze, if this guy from Cole Harbour can do it, why can’t I?’ That dream starts very early now.”

As more NHLers come out of the region, more young players are competing to make the rosters of teams such as Dartmouth, seeing a path to a professional career in hockey that wasn’t there before, LeBlanc said.

“Now it’s a reachable target for them,” he said. “Now they see all those others players, and they work that much harder. They’re now training 12 months a year. The skill level has increased along with it.”

Players who make midget Triple A rosters today see it as a clear stepping-stone to bigger things, Crowell said. That’s brought a whole new level of professionalism to their approach, he said, with hockey-specific strength and conditioning programs and training that doesn’t take any time off year-round.

“It used to be the kids came to training camp to get themselves into shape. Now they all have personal trainers, and they show up in great shape,” he said. “You might have had five athletes doing this on your team in the past. Now they’re all doing it.”